Half of a Thought: Immersion and Photorealism

What does immersion mean, when we talk about video games?

This question has endured for quite some time with many people speculating and theorizing, myself included, but what bearing does this have on modern games and the current generation of consoles. A time when people can buy ‘The World’s Most Powerful Console,’ where photorealism is on the rise and 4K is the only way to play in these beautifully rendered worlds.

Recently I decided to re-read one of my university purchases; titled Better Game Characters by Design by Katharine Isbister, an associate professor of literature, language and communication at the Rensselaer Polytechnic Institute with a focus on social technologies.

In the book, there is an interview with Gonzalo Frasca, a video game researcher, developer; publisher of the online Game Studies journal, and creator of weblog ludology.org. He said something particularly interesting in this interview about ‘immersion’ or rather the term and how it is used in relation to video games and design: a discussion concerning both video games and technology popular in numerous scientific and academic circles, as well the mainstream media.

When asked if he thought deliberately about the effect of point-of-view on a player or his/her tendencies when designing the game September 12, he went on to say, ‘I believe that one of the most overhyped ideas in game design ‘is immersion. Immersion is good if you want to be outside of the real world, but in order to explore reality you need to break it.’

As I stated before this discussion has been had by many across a broad spectrum of publications but this statement specifically poses a solid viewpoint: that games require immersion on some level but to really immerse, the designer has to break reality.

All video games break reality. However, Frasca’s statement inadvertently implies that making a game ‘more realistic’ for purposes of immersion is pointless because players then can’t escape the really real world (yes, I just referenced The Crow). That is, of course, assuming that a player wants to use video games for this purpose, rather than say social engagement or competition for example, though those could also be considered forms of escapism.

I would argue that: the more real or like the real-world something tries to be, the more glaringly unreal it’s logical fallacies, systems, and such, become, which in my view renders immersion, as it pertains to mediated design in video games, and photorealism in particular, somewhat redundant. In short: I agree with Gonzalo.

Since reading this article I have begun referring to this as the: ‘immersion conundrum’. Because if this is true broadly-speaking, then leaning further into photorealism or the concept of realism, a trend induced by vast advances in technology driving new hardware, could have a significant effect on how the player connects or immerses themselves into an experience.

Take for example Guerrilla Games’ Horizon Zero Dawn and Nintendo’s The Legend of Zelda Breath of the Wild. 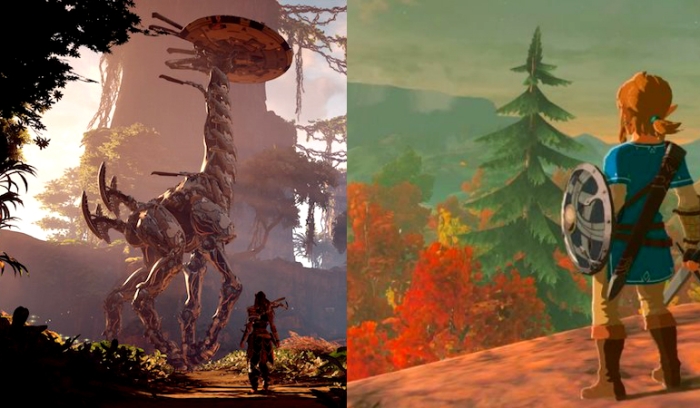 One, though set in a fictional universe, produces its own cultures, people, flora, and fauna, very much resembling our own (barring robot dinosaur hybrids).

Critically it has been referred to as one of the most beautiful games to have been released in the last five years on the PlayStation console, thanks in large part to its lifelike visual quality. Though the world is largely alien, it at points looks as tangible and ‘real’ as the scene within your own window frame.

Breath of the Wild, by contrast, is a much simpler-looking mediated game world by design, similar to that of Wind Waker.

Though environments are relatable to the world in which we live, with green grass, mountains, lakes etc, the world of Hyrule is inhabited by monsters and anthropomorphic animal-folk, fairies, goblins and more. The game is set in a fairytale-like world with a storybook visual quality to match.

These are two vastly different art directions for somewhat similar structural frameworks (that being: open-world play, exploration, puzzle solving, action and combat), yet, when you play the two, you notice incredible differences.

For example, in Breath of the Wild you can retrieve every arrow you fire, whereas in Horizon Zero Dawn you cannot, even if the arrow is within reach; fire arrows hit the floor in Horizon and burn out quickly, yet in Hyrule you can set fire to bushes and dry grass, even unintentionally; in Aloy’s world, aiming a weapon at a non-player character will elicit no reaction, yet all creatures inhabiting Link’s world are fearful in the same situation.

Obviously, these have to do with systems and functional design, in both games. But these examples of in-game physics and how they affect the game world are more obviously incongruous in something like Horizon Zero Dawn because it has a more realistic appearance. Contrastingly, Breath of the Wild‘s relateable physics is unexpected.

So, it would be easier to say that Nintendo’s open world, though less superficially ‘realistic’ could in some cases be considered more immersive by design; the game clearly simulates the kinds of rules we observe in our daily lives and requires the player to use this knowledge in-part to progress in-game. Momentum can be harnessed in the freezing of time and so on.

That said when a player can’t climb an accessible rock in Horizon Zero Dawn but can climb the signposted ledge right next to it, that player notices. But in The Legend of Zelda, it is easy for a player to understand that their work will be made much harder if they climb a rock in a rainstorm rather than the sun, though Link has no special climbing gear or discernible ledges to grip.

To summarise, visuals affect how we perceive a fictional space.

The use of the term ‘immersion,’ in reference to the mediated plane, in particular, seems to generally operate under the belief that: realism (or realistic immersion) requires realistic visuals. In turn, unrealistic visuals will equate to an unreal world. But in the case of the two games I just mentioned, the opposite in many ways is true. Where Breath of the Wild = unrealistic realism (operating in the realm of the canny), Horizon Zero Dawn = realistic unrealism (and is therefore uncanny).

That said, for the purpose of appeal, the uncanny is what Guerilla Games was aiming for during the design process.

Jan-Bart van Beek talked at length about this to Kotaku’s Patricia Hernandez in an article on the site. ‘To some degree, we indeed make it [Horizon] unnatural,’ he said, adding later, ‘It’s not a ‘reality’ simulation, it’s all very controlled.’

You could argue then that the subject of realism in reference to Horizon Zero Dawn specifically is irrelevant. The aim, after all, was not to replicate the real world literally through photorealistic visuals but present an enhanced version of the world, something akin to a ‘BBC nature documentary.’ I think the issue of thwarted immersion still stands, however; better-than-the-real-thing simply represents a curated version of reality, seen at it’s ‘most impressive.’

The Legend of Zelda Breath of the Wild, as with every other game, similarly constructs a kind of reality through its visuals, but does so in a way that is divorced from surface realism. The game exaggerates and replicates in abstraction by comparison.

But does any of this really have any bearing on immersion? As I touched upon earlier, a player immerses through play as well.

All games establish rules and limitations. This is something that, if well designed or explained, players can swiftly work out what is expected of them, then adapt to and deliver on those expectations thereby fulfilling their role within the game world and playing by the rules set in the structural plane.

Rules and systems of play aren’t always specific to just one game world but can be established across many games or an entire genre, creating a language of sorts. This is true for the game world as well the controller, keyboard or any other way a player might interface with a game.

Both Horizon Zero Dawn and Breath of the Wild also utilize rules that have been established in and evolved across other games of similar genres.

The former exhibiting platforming systems that employ white or scuffed textures to indicate a way through for example, or a crafting system involving weapons, items, and traps we have seen before. The bow and arrow, for example, uses mechanical components to create lighting ammunition, and certain parts of a robot can be salvaged in the crafting of a tripwire: features of many video game arsenals with a twist befitting this game world.

The latter implementing mechanics of play typical of Nintendo properties. Players can travel the open-world setting using traditional elements associated with other well-known Nintendo games such as Super Mario, Metroidvania and indeed within other Zelda games in the series.

Taking that into account, surely immersion is just a matter of systems and how harmoniously they are executed within the game space and with the player. Immersion is a misnomer because video game spaces by virtue of their nature (that they are to be played in the way the game demands) will always limit the player and are therefore unreal to start.

For example, in the MMORPG Final Fantasy A Realm Reborn players must be level 50 or above in one class to be able to purchase a house and can only own one at any given time; in Animal Crossing flowers wilt and die outside, and players can circumvent this by preserving these in a storage chest, water notwithstanding. To summarise, all games have rules or codes of conduct that don’t necessarily translate to the real world.

But I would argue that video games such as Breath of the Wild, like Beyond Good and Evil, Stardew Valley or Undertale, embrace this almost nonsensical nature wholeheartedly by visually presenting itself as something to be played within the clear confines of a ruleset, map, physical ability, et al.

Games like Horizon Zero Dawn, Tomb Raider 2013 or immersive sims like Skyrim, by contrast, trick the player into forgetting those limitations through the guise of realism, even though those rules and limitations still exist. Games such as these say: this isn’t a game, it is a real world. Whereas the handful of games I first mentioned, say: you are playing a game, which is a world in and of itself. The difference in direction is slight but the impact tremendous.

One encourages player immersion through escapism, the other does not, because one embraces unrealism, deliberately breaking reality, as Gonzalo Frasca said, to greater immersive effect. Where the other aims to emulate reality through either realism or hyper-realism, which, within a video game world, is nothing at all like reality as we understand it outwardly or structurally.

Thus a game world’s mediated design affects how we interpret our place, as a player of the game, within that world and make sense of the rules within said space. This could be, in part, responsible for how successfully a player might immerse themselves in the world of the game.

But this post is only half of a thought!

What do you think about photorealism and the possible effect it might have on immersion? Do you think the term should be dropped altogether? Sound-off below and get in on the discussion.